April 04, 2019
To believe BC Liberal rhetoric on fuel prices in BC, the NDP are responsible for the highest gas prices in North America. Facts however, tell another story.


While it is true that the carbon tax in BC went up by a penny, that's hardly the explanation for the recent dramatic jump in price. There are several factors. 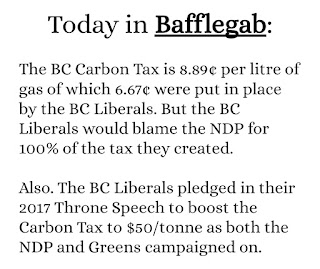 Regional governments, city halls, transit authorities all have a hand in adding layers of taxation to fuel costs in BC. To believe the BC Liberal version of this: the NDP is responsible for 100% of this tax burden.

What's even more asinine is the failure to build Kinder Morgan that the NDP opposes is also responsible for this fuel price overload. Would someone please tell the BC Liberals that the expanded Kinder Morgan project is for export only?

The Alberta based tar sands fuel that ends up in our vehicles are processed at two BC based refineries and imported through some Washington State refineries. The increase in flow from an expanded pipeline isn't for our market: and may itself lead to an increase in fuel costs for locals, the pipeline and expanded port facility is for export only.

I get it. The BC Liberals are capitalizing on a bread-and-butter issue to demonize the NDP; and it could trigger a softening of NDP support.

But imagine what would happen if folks again realize that the BC Liberals are spinning a yarn here and misleading BC voters for gross, cynical, political reasons.

They'd conclude that the BC Liberals are unfit to govern.

And they'd be right. 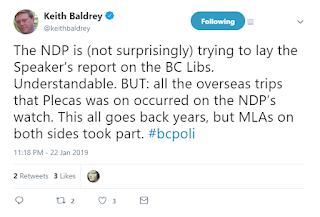 Arbitrary regime change used to be opposed by Liberals

Let me make something clear right away. I'm no Maduro supporter and I think his regime is no different than any other totalitarian regime elsewhere, except that they've mastered the art of pretending they're a functioning democracy where they are clearly not. It was a bold position to take when then Prime Minister Jean Chretien announced that our nation would not participate in the second Iraq with war along side George W. Bush. He was immediately demonized by Harper and the Conservative party, but the principal was right. Regime change is the domain of the oppressed to topple said regime. Once an external power intervenes (as America and UK did) they became the enemy. One can plausibly argue that this intervention is the spark that eventually created ISIS. But that is a debate for another day. So here we are with current US President Donald Trump arbitrarily appointing the opposition leader as "President" in Venezuela, and the nation's that opposed r
Read more